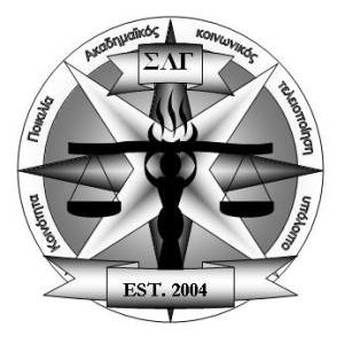 The idea of establishing another sorority on the University of Waterloo campus came to five friends as they were meeting at the Mongolian Grill on March 15th 2004 for martinis. These five friends were Carla Calderon, Crystal Leigh, Sabina Medarevic, Tori Chapman and Melissa Smith. They had the goal of starting a sorority that was different from what was already available to them, something that paralleled with their own ideals. On March 17th 2004, Shyna John joined the girls and they began to search for an existing sorority that met their values.

They found Sigma Lambda Gamma, which was a sorority founded in the United States. It was a Latina-based group, whose morals called for multiculturalism, academics, social interaction, integrity, and community service. The girls felt that this sorority held beliefs similar to their own. By this time, more girls had joined the group in the act of establishing a sorority, this included Alysha McColl, Queenie Lo, Geri Jesuthasan and Carolyne Swayne. They contacted the Sigma Lambda Gamma head office to express their interest. Sigma Lambda Gamma’s head office was ecstatic about the prospect of the girls establishing both their first Canadian, and their first international chapter.

On April 17th 2004 these ten women met with members of the board of expansion of Sigma Lambda Gamma. However, a conflict arose because the American Sigma Lambda Gamma policy was to collect sisters academic transcripts in order to make sure they maintained a 3.0 GPA. Yet, under Canadian law, we are unable to discriminate against anyone on any basis. Therefore by requiring a 3.0 GPA, this would be discrimination based on academic achievement.

Carla refused to sacrifice this ideal based on the fact that her idea of a sorority included the involvement of all those interested and she felt that by becoming a sister, each girl would help the others in their academic endeavours. The rest of the girls agreed with Carla that within their new sorority there would not be any discrimination. And so, on June 2nd 2004 the sisters contacted the board of expansion to tell them that they would not be joining the American sorority. The girls successfully overcame their first obstacle.

From there, the girls worked on establishing their own local sorority. They decided to use the name Sigma Lambda Gamma and the sorority’s ideal of multiculturalism, as these were aspects already known throughout the Waterloo campus. Although they lost a few girls in these beginning stages; Carla Calderon, Crystal Leigh, Sabina Medarevic, Tori Chapman, Shyna John, Alysha McColl, Queenie Lo and Carolyne Swayne, put in the hard work and persistence so that they could create the Charter, the Constitution, their Creed, their Oaths, the rush and pledge processes, their annual events and all ceremonies and rituals. Finally on November 14th 2004, they were initiated and became sisters.